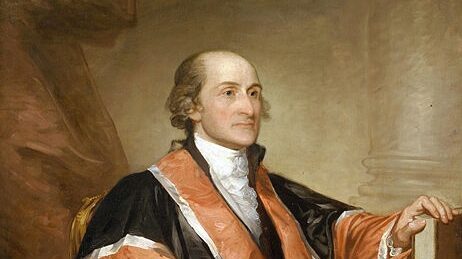 Born in 1745, John Jay showed great promise at a very young age, entering King’s College (now Columbia University) at age fourteen. He graduated with the highest honors in 1764 and was admitted to the bar to practice law in New York in 1768. As one of the most prominent members of the New York Committee of Correspondence, through which the colonies traded political ideas and information, Jay was selected as a delegate to the First Continental Congress in 1774. Jay continued to believe that reconciliation with Great Britain was possible and preferable and so retired from the Continental Congress in 1776 rather than sign the Declaration of Independence. He returned to New York, where he helped draft the state’s constitution, and was elected New York’s first Chief Justice. Once the Declaration was signed, however, he became an ardent supporter of independence and in 1778 represented New York at the Second Continental Congress where he was elected president.

Jay spent much of the Revolutionary War as Minister (Ambassador) to Spain, seeking diplomatic recognition for the new United States, financial support, and a treaty of alliance and commerce. He then moved to Paris, where, as a member of the American delegation, he negotiated the peace terms ending America’s War of Independence with Britain, culminating in the Treaty of Paris in 1783.

On his return to Congress in 1784, he discovered he had been appointed Secretary of Foreign Affairs (today, Secretary of State). During his five years as Secretary, he became convinced that the U.S. needed a stronger central government than that laid out by the Articles of Confederation. He actively pursued ratification of the U.S. Constitution in New York and, along with Alexander Hamilton and James Madison, wrote the Federalist Papers, arguing support popular for the Constitution and the new system of government.

Shortly after the establishment of the new U.S. government, George Washington appointed Jay the first Chief Justice of the new Supreme Court. Based on his experience as a negotiator for the Treaty of Paris, Washington called on Jay to negotiate with Great Britain to resolve several outstanding issues between the two nations. The resulting “Treaty of Amity, Commerce, and Navigation,” commonly referred to as the “Jay Treaty,” was extremely controversial and the Congressional fight over its passage widened the division between Federalists and the Democrat-Republicans in Congress, led to the creation of national parties¹, and moved Jay to resign from the Court.

On his return from the treaty negotiations in London, Jay learned that he had been elected Governor of New York. During his two terms of office, he fought for the abolition of slavery and in 1799 succeeded in passing a gradual emancipation act, whereby children of slaves became free on their 25th birthday for girls and 28th for boys, thus bringing about the emancipation of all slaves in New York before his death in 1829.