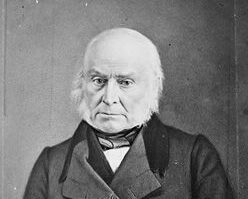 Negotiated the Treaty of Ghent, Wrote the Monroe Doctrine

John Quincy Adams embarked on his first diplomatic mission at age 10, when he accompanied his father, John Adams, on a mission to France. For the next eight years, he lived in Paris, the Netherlands, Russia, and England. After this illustrious beginning, he went on to become one of the most accomplished diplomats in the nation’s history. Between 1794 and 1811, Adams served as Minister to the Netherlands, Germany, and Russia, where he persuaded Czar Alexander to allow American ships to trade in Russian ports. In 1814, he led the U.S. peace commissioners in five months of negotiations for the Treaty of Ghent, which ended the War of 1812.

In 1817, President James Monroe made Adams his Secretary of State. Serving in that position until 1825, Adams played a crucial role in creating the Monroe Doctrine, which warned European nations not to meddle in the affairs of the Americas. He also negotiated agreements that guaranteed U.S. fishing rights off the Canadian coast, established a section of the U.S.–Canadian border, and transferred Florida from Spain to the United States.

John Quincy Adams served one term as President of the United States from 1825 to 1829. He was later elected to nine consecutive terms in the U.S. House of Representatives, the only President to do so.