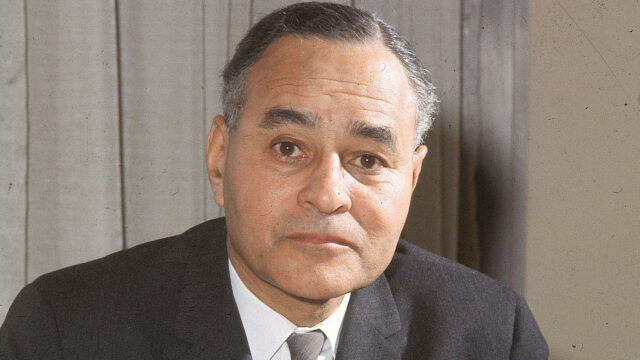 Undersecretary General to the United Nations

Beginning in the 1940s, Ralph Bunche embarked on a career that made him one of the most prominent diplomats in U.S. history. He was a leading advocate of granting independence to colonial regimes around the world. In 1944, he joined the Department of State as an advisor on the future of colonial territories. He also advised the U.S. delegation that helped to draft the charter of the United Nations. Bunche joined the United Nations in 1946. He played an important role in the creation and adoption of the Universal Declaration of Human Rights. As the U.N.’s chief negotiator, his mediation efforts led to the signing of an armistice between Arabs and Jews in Palestine in 1949. For this accomplishment, he was awarded the Nobel Peace Prize in 1950. In 1956, he supervised the deployment of 6,000 United Nations peacekeeping troops around the Suez Canal to defuse the crisis initiated by the attack of Israel, France, and Britain upon Egypt. In the 1960s, he led U.N. peacekeeping missions in the Congo and Cyprus. He became Under Secretary General of the United Nations in 1968. A lifelong advocate for civil rights, Bunche joined Martin Luther King’s March on Washington in 1963 and civil rights marches in Montgomery and Selma, Alabama.

Ralph Bunche and the Drive to Decolonization