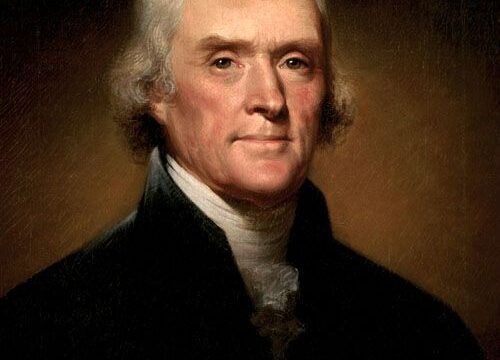 Thomas Jefferson was born in the British colony of Virginia to an influential planter. After studying the liberal arts at the College of William and Mary in Williamsburg, he entered a law office and then the Virginia House of Burgesses, distinguishing himself through his written eloquence. In June 1775, Jefferson was elected to the Second Continental Congress, after which he served in the Virginian government until his appointment as a commissioner to France in 1784.

Originally sent to Paris to assist Benjamin Franklin and John Adams with commercial negotiations, Thomas Jefferson was formally appointed to full Minister Plenipotentiary in 1785 where he was enormously popular with the French public. His ministerial successes included a treaty with Prussia in 1785 and a Consular Convention with France in 1788. When Jefferson left in 1789, it was to assume the post of Secretary of State in the new federal government under President George Washington. As the United States’ first Secretary of State, Thomas Jefferson supported the French as America’s natural allies but abided by Washington’s preference for neutrality in foreign policy.

After resigning as Secretary of State in 1793, Jefferson became Vice President under President John Adams in 1796 and then the third President of the United States in 1800. As President, Jefferson sent naval ships to force the Barbary States to cease harassing U.S. shipping. Most notably, he authorized the Louisiana Purchase from Napoleon Bonaparte in 1803. He also encouraged Congress to pass the 1807 Embargo Act as an attempt to distance the United States from the Napoleonic Wars in Europe. When he left the Presidency in 1809, Jefferson devoted himself to establishing the University of Virginia. He died at Monticello in 1826.

Office of the Historian: Biography of Thomas Jefferson