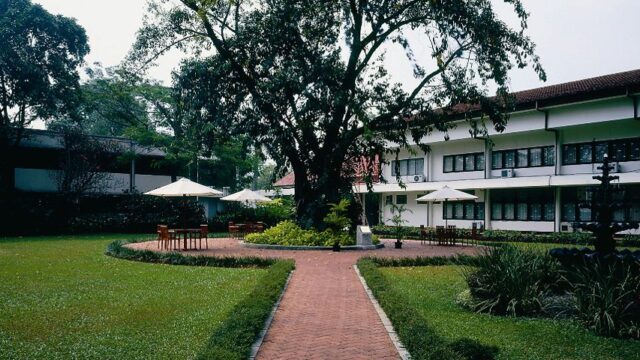 U.S. merchants traded with the Dutch colony of Indonesia for many years, and the first U.S. consular post was established in Jakarta in 1801. In 1949 Indonesia won its independence from the Netherlands and the United States recognized it, establishing formal diplomatic relations that same year. The current U.S. Embassy compound in Jakarta opened in 1958. Besides the embassy, the United States operates embassies in Bali, Surabaya, Medan, and the U.S. Mission to ASEAN. U.S.-Indonesia relations have taken on increasing importance. Indonesia is the world’s third largest democracy, has the largest Muslim-majority population, is the tenth-largest economy in the world by purchasing power, and possesses the world’s greatest marine biodiversity and its second greatest terrestrial biodiversity. Indonesia also borders the South China Sea, which has the world’s busiest sea lanes — trillions in cargo and as much as 50 percent of the world’s oil tankers pass through the South China Sea every year. Indonesia’s democratization and reform process since 1998 has increased its stability and security, and resulted in strengthened U.S.-Indonesia relations. Principal U.S. exports to Indonesia include transportation equipment, including aircraft, food and agricultural products, machinery and equipment, and chemicals. However, there are significant challenges to our bilateral economic relationship: the implementation of protectionist laws, limited infrastructure, and an unevenly applied legal structure. For more information on the ambassador and the U.S. relationship with the country, click here.

Embassy of the Republic of Indonesia