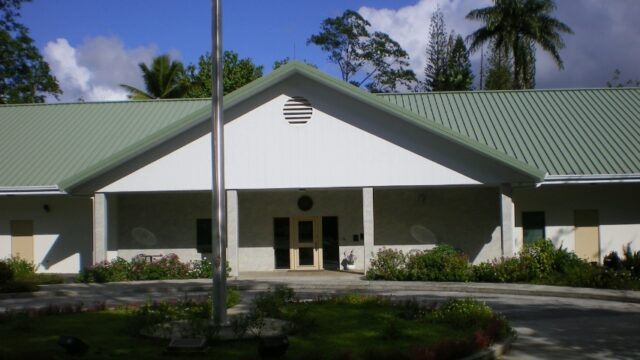 Following World War II, the islands of what is now the Federated States of Micronesia (FSM) became part of the United Nations Trust Territory of the Pacific Islands, administered by the United States through the Department of Interior Office of Insular Areas (DOI/OIA). The FSM became independent in 1986, when it entered into a Compact of Free Association with the United States that included 15 years of substantial development aid. An Amended Compact was negotiated in 2003 for an additional 20 years of financial assistance under bilateral management. The basic relationship of free association continues indefinitely. The United States currently operates the embassy in Colona. The Governments of FSM and the United States maintain deep ties and a cooperative relationship. Reflecting the strong legacy of trusteeship cooperation, over 25 U.S. federal agencies operate programs in the FSM. Under the Compact, the United States has full authority and responsibility for the defense and security of the FSM. This security relationship can be changed or terminated by mutual agreement. Also under the Compact, FSM citizens are allowed to live, work, and study in the United States without visas. FSM citizens volunteer to serve in the U.S. Armed Forces at approximately double the per capita rate of U.S. citizens, and are eligible for admission to U.S. Service Academies, though they cannot serve as commissioned officers as non-citizens. U.S. citizens can live and work freely in the FSM with no visa requirements. For more information on the ambassador and the U.S. relationship with the country, click here.

Embassy of the Federated States of Micronesia