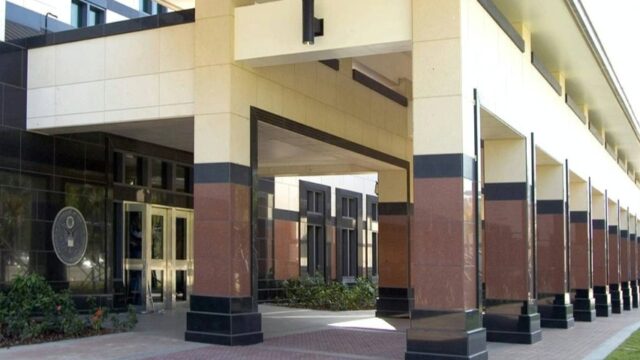 The United States established its first direct diplomatic relationship with Cambodia on June 29, 1950, with the appointment of Donald R. Heath as Envoy Extraordinary and Minister Plenipotentiary. Heath presented his credentials to King Sihanouk on July 11, 1950. Today, the US embassy is in Phnom Penh. Over the last several decades of the 20th century, the United States and Cambodia established, broke off, and re-established relations as a result of armed conflict and government changes in Cambodia. Full diplomatic relations were established after the freely elected Royal Government of Cambodia was formed in 1993. President Obama became the first incumbent President to visit the country during the November 2012 East Asia Summit. The United States is working with Cambodia to further develop its democratic institutions and promote respect for human rights. The two countries also are striving to increase trade and address challenges from promoting regional security to expanding global health and development. The United States also supports efforts in Cambodia to reduce the prevalence of HIV/AIDS, improve nutrition for children, eliminate human trafficking and corruption, address environmental degradation, better manage natural resources, foster economic development, achieve the fullest possible accounting for Americans missing from the Indochina conflict in the 1960s and 1970s, and to bring to justice those most responsible for serious violations of international humanitarian law committed under the 1975-79 Khmer Rouge regime. For more information on the ambassador and the U.S. relationship with the country, click here.

United States, Department of State, Office of the Historian and Buruea of East Asian and Pacific Affairs

United States, Department of State, Office of the Historian