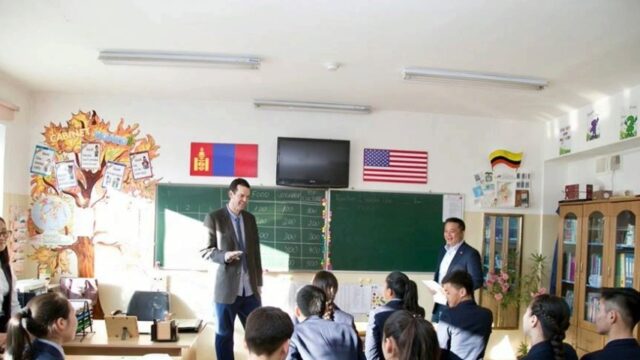 For roughly 200 years prior to 1911, what is today the nation of Mongolia was contained within the territorial borders of the Empire of China. After the collapse of that empire, a group of Mongolia nationalists established a new republic in 1924, with the assistance of the Soviet Union. Mongolians affirmed their independence in a plebiscite in October 1945, but because Mongolia remained close to the Soviet Union, relations between Mongolia and the United States were slow to develop. The United States established diplomatic relations with Mongolia in 1987. Bordered exclusively by Russia and China, Mongolia describes the United States as its most important “third neighbor.” The U.S. embassy is in Ulaanbaatar. The United States has sought to assist Mongolia’s market-oriented reforms and to expand political, cultural, educational, and defense cooperation. The two countries have signed a cultural accord, a Peace Corps accord, and a consular convention. English has been compulsory in Mongolian schools since 2005, and interest among Mongolians in learning English and in studying in the United States increases every year. Since 2011, the government of Mongolia has committed hundreds of thousands annually to co-fund the Fulbright masters program, tripling the number of Mongolians who study in the United States under this initiative. In addition, over 1,500 Mongolian students study at American colleges and universities, some via private scholarships. U.S. and Mongolian legislators also participate in exchanges in which they share information and experiences about democracy and institutional reform. Mongolia deployed troops to Iraq from 2003 through October 2008 and now has troops in Afghanistan supporting Coalition operations. For more information on the ambassador and the U.S. relationship with the country, click here.