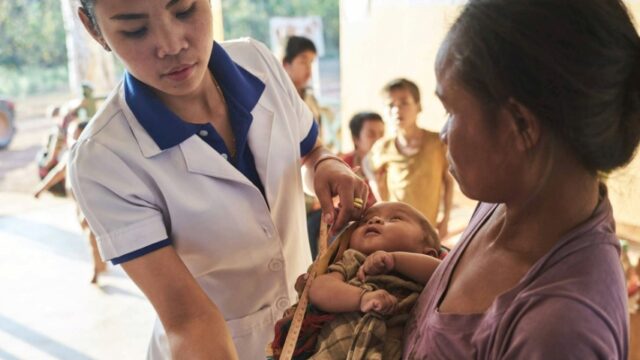 The United States established full diplomatic relations with Laos in 1955, following its full independence from France in 1954. Within a few years, Laos entered into civil war, and the United States supported the country’s royal government. For nearly a decade beginning in 1964, Laos was subjected to heavy U.S. bombing as part of the wider war in Indochina. Following the change of regimes in Vietnam and Cambodia in 1975, a communist government also came to power in Laos. The government aligned itself with Vietnam and the Soviet bloc, implementing one-party rule and a command economy. U.S.-Lao relations deteriorated after 1975, and U.S. representation was downgraded. After the collapse of the Soviet Union, Laos sought to improve relations with other countries. Full U.S.-Lao diplomatic relations were restored in 1992, with the embassy located in Vietinne. While accounting for American personnel missing in Laos and clearing unexploded ordnance remain important aspects of the bilateral relationship, the U.S.-Laos relationship has broadened to include cooperation on a range of issues such as health, child nutrition, education, environmental protection, trade liberalization, legal reform, counter-narcotics, law enforcement cooperation, and English language training. In 2009, the Lower Mekong Initiative (named for the Mekong Delta many countries share) was launched. It addresses complex, transnational development issues in the region. For more information on the ambassador and the U.S. relationship with the country, click here.