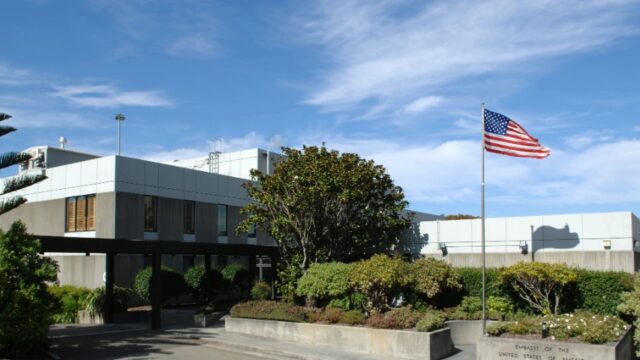 On September 26, 1907, the constitutional status of the colony of New Zealand was elevated to that of a self-governing Dominion in the British Empire. While the new nation was sovereign when it came to its domestic affairs, the United Kingdom maintained control over its relations with the wider world. Over the next four decades, New Zealand gradually gained control over its external policy. The Balfour Declaration of 1926, issued at the end of the Imperial Conference held in London that year, recognized that the United Kingdom and the Dominions were “autonomous Communities within the British Empire, equal in status, in no way subordinate one to another in any aspect of their domestic or external affairs.” In December 1931, the United Kingdom codified this relationship in the Statute of Westminster, which specified, however, that its provisions would not come into effect until formally adopted by the government of New Zealand. On November 25, 1947, New Zealand’s Statute of Westminster Adoption Act 1947 became law. Formal diplomatic relations with New Zealand were established in 1942, following the United Kingdom’s recognition of New Zealand’s domestic and external autonomy within the British Empire. During World War II, U.S. military personnel were stationed in New Zealand to prepare for battles such as Guadalcanal and Tarawa. Today, the U.S. embassy is located in Wellington, and also is accredited to Samoa. The United States also operates a consulate in Auckland. The United States and New Zealand share common elements of history and culture and a commitment to democratic principles. New Zealand’s relationship with the United States in the post-World War II period was closely associated with the 1951 Australia-New Zealand-United States (ANZUS) security treaty, under which signatories agreed to consult in case of an attack in the Pacific and to “act to meet the common danger.” This changed in the 1980s, when New Zealand’s implementation of a policy barring nuclear-armed and nuclear-powered warships from its ports effectively prevented practical alliance cooperation under ANZUS. In 1986, the United States suspended its ANZUS security obligations to New Zealand. The New Zealand government attaches significant importance to continued close political, economic, and social ties with the United States. New Zealand actively engages in peacekeeping and international security efforts around the world. The United States and New Zealand work together on a range of scientific areas, especially research in Antarctica. Christchurch is the staging area for joint logistical support operations serving U.S. permanent stations at McMurdo and the South Pole, as well as New Zealand’s Scott Base. For more information on the ambassador and the U.S. relationship with the country, click here.