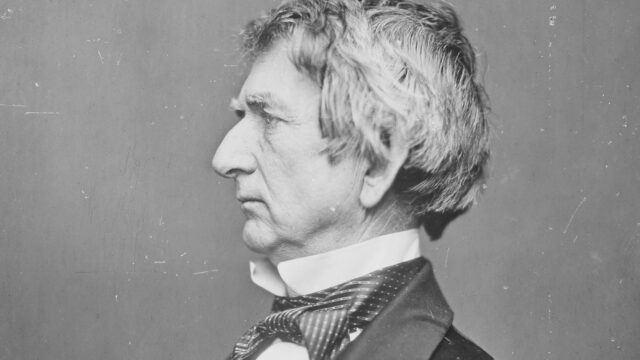 In 1861, Abraham Lincoln chose his former rival for the Republican presidential nomination Senator William Henry Seward of New York to be his Secretary of State. He served under Lincoln and his successor, Andrew Johnson, until 1869. Although Seward was at times impetuous – shortly after taking office in 1861 he proposed to Lincoln that the Union be preserved by starting a war with France or Spain – Lincoln blocked his imprudent projects and channeled his brilliance and effervescence into more useful activities.

An outspoken abolitionist, Seward negotiated the Lyons-Seward Treaty of 1862, which put in place new measures to end the Atlantic slave trade.

During the Civil War, he carefully managed diplomatic relations with Great Britain and France. He persuaded the British government to stop British shipyards from building war ships for the Confederacy. And he continually pressed the French and British not to recognize the Confederate states as an independent nation. His success on behalf of the Union cause was rewarded by an attempted assassination on the same night that the conspirators killed Lincoln. Fortunately, Seward survived the attack.

Seward was a firm proponent of the Monroe Doctrine and a firm believer in its philosophical underpinning, Manifest Destiny—the inevitability of the United States expanding west to the Pacific Ocean. As early as 1846, Seward had stated that “our population is destined to roll its resistless waves to the icy barriers of the north, and to encounter oriental civilization on the shores of the Pacific.”

The end of the Civil War in 1865 enabled him to put his beliefs into practice. Two of his major achievements occurred in 1867. With the use of restraint, tact, and wisdom, Seward’s efforts over several years to persuade Emperor Napoleon III to withdraw French troops from Mexico came to fruition. That same year, Seward negotiated the purchase of Alaska from Russia for $7.2 million. He had wisely invited Senator Charles Sumner, the chairman of the Senate Foreign Relations Committee, to join him in the negotiation with the Russian minister. Sumner persuaded the Senate to give its consent to the treaty, 37 to 2. When the appropriation for the purchase languished in the House of Representatives, reflecting the views of Eastern newspapers which ridiculed the agreement as “Seward’s Folly,” the mostly favorable Western newspapers helped to persuade public opinion and the House to support the purchase. The sale ended Russian influence in North America, gave the United States access to the northern Pacific Ocean, and added territory nearly twice the size of Texas for about 2 cents an acre. Asked to name his greatest achievement, Seward said “The purchase of Alaska, but it will take the people a generation to find it out.”

Seward also attempted to purchase the Danish West Indies (Virgin Islands) and to annex the Dominican Republic in the Caribbean. Not content with having reached the Pacific Coast, Seward wanted to move into the Pacific itself, to support both trade with the East and the defense of the United States. While he successfully appropriated Midway Island, he was not successful in gaining control of the Hawaiian Islands.