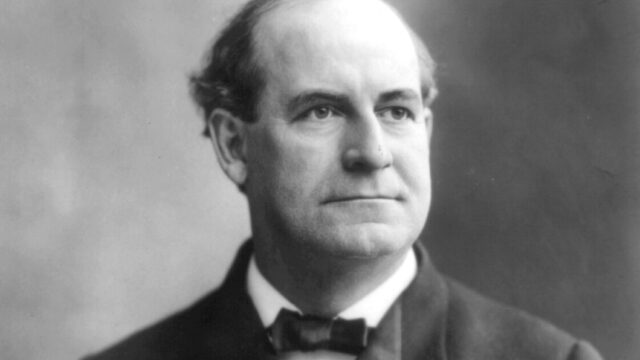 Born in 1860 in Salem, Illinois, William Jennings Bryan graduated from Illinois College in 1881 and from the Union College of Law in 1883. After a brief career in law, Bryan entered Congress as a Representative for Nebraska in 1890 and served until 1895. Upon returning to Nebraska he became an editor for the Omaha World-Herald . In 1896, Bryan made his famous “Cross of Gold” speech at the Democratic convention where he argued in favor of free silver. His speech secured himself the presidential nomination although he lost to Republican William McKinley.

Bryan was well-known as an orator and made hundreds of speeches during his next two presidential bids in 1900 and 1908. Even though he never secured the presidency for himself, Bryan’s support was extremely instrumental in the election of Democrat Woodrow Wilson in 1912. Wilson, in return, made Bryan Secretary of State.

As Secretary, Bryan advocated pacifism and diplomacy instead of military action. His most notable accomplishment was the negotiation of treaties with 30 different signatories that provided for a “cooling off” period during disputes to allow time for arbitration to prevent war. Another success was the Bryan-Chamorro Treaty in 1914 that gave the United States the right to build naval bases at the Gulf of Fonseca and on the Corn Islands as well as a canal between the Atlantic and Pacific Oceans in Nicaragua. When World War I began, Bryan was firmly in favor of American neutrality. He resigned as Secretary of State in 1915 when President Wilson took a hard line against Germany following the sinking of the Lusitania.

After his tenure as Secretary, William Jennings Bryan argued against the teaching of evolution in schools at the Scopes Monkey Trial. He died shortly after the close of the trial in 1929.