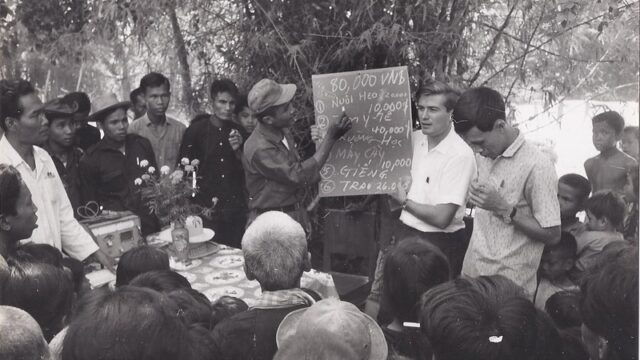 A Window into American Soft Power in Rural Vietnam

The National Museum of American Diplomacy hosted an event featuring up-close and personal stories of diplomacy on October 18. This event, A Window into American Soft Power in Rural Vietnam, 1962-1964, told the importance of cultural diplomacy.

NMAD joined retired Foreign Service Officer Robert Warne, his spouse Susanna (Suzy), and retired United States Government official, Rufus Phillips. Phillips is the author of Why Vietnam Matters: An Eyewitness Account of Lessons Not Learned and was featured in the first two episodes of the 2017 PBS documentary, The Vietnam War.

The program began by sharing the background of Robert Phillips. Phillips spent 14 years working on Vietnam foreign policy issues after the French defeat at Dien Bien Phu in 1954. In the early years of the Kennedy administration, he was considered to be an expert advisor on how best to counter the communist influence of the Viet Cong army in South Vietnam. He conceived of the Rural Affairs Program—executed by the Department of State and the U.S. Agency for International Development—to support counterinsurgency and rural development of “strategic hamlets” in the Mekong Delta. For staff, he recruited the best and the brightest in economic development. At the age of 23, Robert Warne had newly joined the State Department as a Foreign Service Officer, after serving in the U.S. Army as the commander of an artillery battery.

Robert and Suzy Warne faced many challenges during their two-year assignment to Vinh Long and Binh Dinh, two provinces in the Mekong Delta. Illustrating his talk with maps and personal photos of himself and Suzy working with local villagers, Warne spoke about his consultations with the provinces’ chiefs on rural economic practices and development. Specifically, when he assisted locals to improve refugee conditions, access to water, and pig farming.

Suzy Warne taught at the local school and described in vivid detail what daily life was like for a young Foreign Service spouse with a 6-month-old daughter. She half-jokingly said she thought her greatest problem in Vietnam would be to find a diaper service. However, upon her arrival she realized the vulnerabilities and dangers posed by the presence of the Viet Cong. She said that Robert taught her how to fire a carbine, and she kept it within close reach in her bedroom wardrobe.

Despite the difficulties, Suzy said the two years in Vietnam were some of the best years of her life. She remembered enjoying entertaining the locals and teaching the young villagers.

Following the panel, collections manager Eric Duyck spoke about Vietnam-related artifacts in the collection. These include service medals, a chart made by a Foreign Service Officer depicting the familial connections between key Vietnamese officials, and a piece of concrete salvaged from outside the U.S. Embassy in Saigon near its wall damaged in the 1968 Tet Offensive.