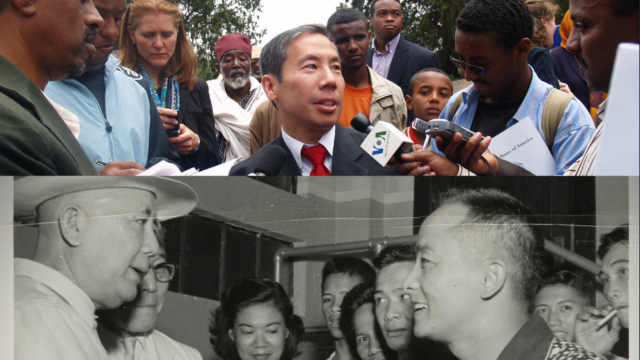 Ambassador Donald Yamamoto was appointed as the U.S. Ambassador to Somalia in 2018.  He most recently served as Acting Assistant Secretary for the Bureau of African Affairs. Previously, he served as Senior Vice President at the National Defense University and in senior positions in Afghanistan. Over the course of his Foreign Service career, he served multiple tours in Africa, including as United States Ambassador to both Ethiopia and Djibouti, and Head of Mission in Somalia, Eritrea and Guinea. Ambassador Yamamoto earned an A.B. and M.A from Columbia University and a M.S. from the National War College. Among his awards are the Robert Frasure Memorial Award, a Presidential Distinguished Honor Award, a Presidential Distinguished Service Award, and a Secretary of State Distinguished Honor Award. Ambassador Yamamoto speaks Japanese, Chinese and French.

Bryan Kenji Schell is a Foreign Service Officer currently serving as the Uganda Desk Officer at the U.S. Department of State. His previous assignments include the Bureau of African Affairs, U.S. Consulate General Barcelona, and U.S. Embassy Bujumbura. He is also the Secretary for the Department of State’s Asian American Foreign Affairs Association.

Boa Lee is a Foreign Service Officer currently serving as Assistant Information Officer in the Palestinian Affairs Unit in Jerusalem.  She has served in Freetown, Bangkok, and Washington, D.C.  Boa was twice elected to the board of the Asian American Foreign Affairs Association.  Prior to joining the Department, Boa was a community organizer working on issues of racial and social justice. She is the daughter of Hmong refugees to the United States, and is from Minnesota.

Elizabeth Liu is a Foreign Service Officer currently serving as the Special Coordinator for the Young African Leaders Initiative in the Bureau of African Affairs. She is also the Vice President of the Department of State’s Asian American Foreign Affairs Association. Liz previously served in the Bureaus of African Affairs and International Narcotics and Law Enforcement Affairs, and in Taiwan and the Philippines.

Daniel Lee is a Foreign Service Officer who has served consular and public diplomacy tours in Chennai, Seoul, Karachi, Brunei, and the Bureau of Educational and Cultural Affairs. Prior to joining the Foreign Service, he taught Asian American history at UCLA and consulted on historical exhibitions in Los Angeles. He serves as the Department of State’s Asian American Foreign Affairs Association’s external liaison to other U.S. government organizations.

Sarah Chacon is a Presidential Management Fellow with the National Museum of American Diplomacy at the Department of State. She graduated from the College of William and Mary with a double major in English and Hispanic Studies and has an M.A. from George Mason University in Arts Management.