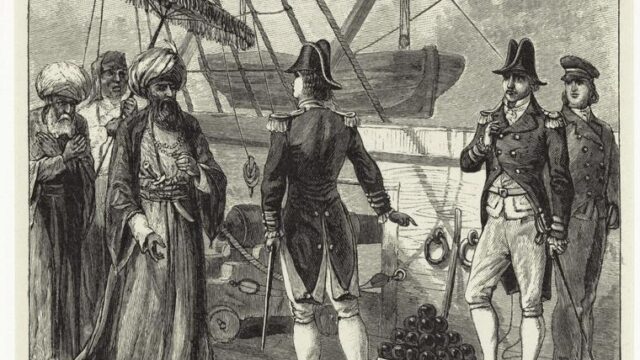 One of the United States’ first international crises occurred in 1793 when North African Barbary corsairs captured eleven American ships and over 100 citizens. NMAD’s Public Historian Dr. Alison Mann helped us understand how this crisis and the diplomatic efforts used played a part in shaping the new United States.

We will discuss how negotiations proceeded and concluded, and how the crisis affected the future of American diplomacy. This Diplomacy Classroom serves as an additional resource for the simulation, The Barbary Pirates Hostage Crisis: Negotiating Tribute and Trade.

Click through the timestamps below to learn more about this early American international crisis:

The NMAD Diplomacy Simulation on the Barbary Pirates Hostage Crisis, discussed during this Diplomacy Classroom, was created with the Una Chapman Cox Foundation. This topic will also be featured at the completed National Museum of American Diplomacy in a major permanent exhibit funded by Ambassador John Loeb, Jr.