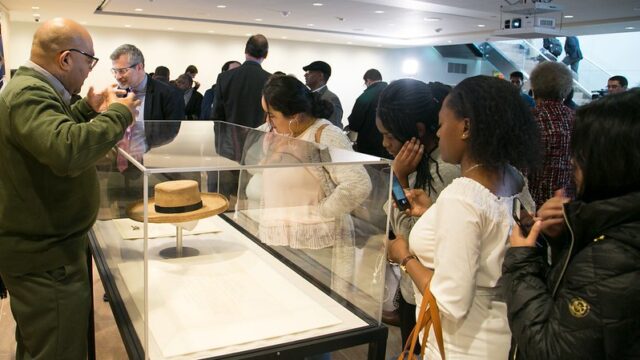 In commemoration of African American History Month, the National Museum of American Diplomacy hosted a program highlighting the little known diplomatic careers of Ebenezer Bassett and Frederick Douglass. The program was held on February 14th in honor of the bicentennial of Douglass’s birth.

Both of these men served as U.S. Ministers — an early title equivalent to Ambassador — to Haiti in the late 19th century. Bassett, appointed by President Grant, was the United States’ first African American diplomat, serving from 1869 to 1877. Douglass, a well-known abolitionist, writer, activist, and civil servant was appointed by President Harrison and served from 1889 to 1891.

Dr. Mann then spoke about Douglass’s efforts to negotiate with the Haitian government for a lease of a coaling station for U.S. ships. Finally, Dr. McLaurin showcased several artifacts associated with Douglass during his time in the Caribbean. These items included a Panama hat, a Bible given to him upon his departure for Haiti by the congregation of the District of Columbia’s Metropolitan AME Church, his diplomatic commission, and his passport.

See more photos of the event.