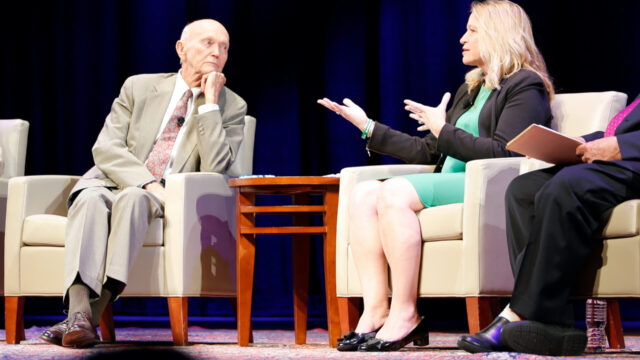 On July 18, 2019, the National Museum of American Diplomacy co-hosted a “Space Diplomacy” panel with Apollo 11 astronauts Michael Collins and Buzz Aldrin. The event highlighted the 50th anniversary of the Apollo 11 moon landing and following diplomatic efforts made by the American astronauts.

The event featured Major General Michael Collins and Buzz Aldrin, two members of the three-man Apollo 11 mission crew, and other senior leaders in space exploration, research, and diplomacy fields. It highlighted how the Apollo 11 mission strengthened American democracy and was one of the defining moments of not only the 1960s but of the 20th century.

Event attendees learned that in 1969, after the successful conclusion of the Apollo 11 mission, the three members of the crew, Buzz Aldrin, Neil Armstrong, and Michael Collins, went on a 37-day, 24-country goodwill world tour. This tour, called “Giant Step,” promoted the Apollo program and American cultural interests abroad.

President Nixon used the diplomatic boost from these goodwill tours to lay the groundwork for renewed U.S. cooperation with China. This “space diplomacy” would take the astronauts, President Nixon, and the United States beyond the divide of the Iron Curtain. This new diplomatic approach also helped ease the hostile tensions between the western and eastern blocs.

During her remarks at the event, Assistant Secretary of State for Global Public Affairs Michelle Giuda introduced astronaut Michael Collins. She noted that after his mission to the moon, President Nixon appointed Collins Assistant Secretary of Public Affairs at the State Department, making her his successor. She expressed appreciation for continuing his legacy and thanked him for his service to the State Department and the United States.

A Definitive Display of American Power

As much as it was a foreign relations achievement and technological marvel, Apollo 11 was also a soft-power victory for the United States. The White House, the State Department, NASA, and the U.S. Information Agency all worked closely together to project an image of Apollo 11 as an American-led, global effort that united the world. Voice of America broadcast live coverage of the lunar landing in 36 languages for an audience of roughly 750 million. Another 650 million watched the lunar landing on television, the first live global broadcast in history. The mission was a success and space diplomacy continues to build bridges and strengthen our international partnerships.

Watch One Giant Leap: Space Diplomacy, Past, Present, and Future below