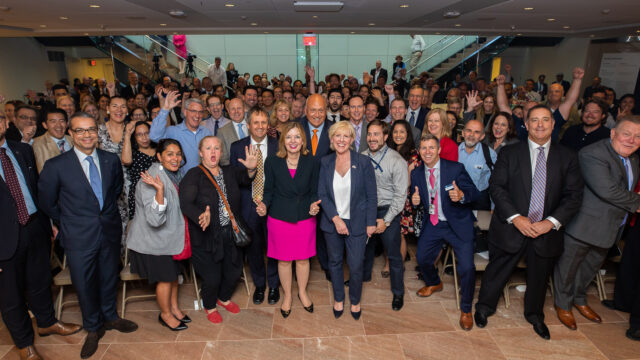 On September 18, 2019, the National Museum of American Diplomacy partnered with the Bureau of Educational and Cultural Affairs (ECA) to host a conversation with Baseball Hall of Famer Cal Ripken, Jr. and Foreign Service Officer Joel Ehrendriech on the power of baseball to promote mutual understanding.

NMAD Director Mary Kane and ECA Assistant Secretary Marie Royce opened the event by welcoming Ripken. They described ECA’s use of sports diplomacy to build bridges between Americans and people around the world at the grassroots level. Then, Kane moderated a special dialogue with Ripken and Ehrendriech highlighting the powerful impact of sports diplomacy at home and abroad.

Ripken shared his experiences as a Sports Diplomacy Envoy in China, Nicaragua, Japan, and the Czech Republic. He told the audience how baseball serves as an icebreaker for him to connect directly with kids. Not only does he lead baseball drills and clinics, but Ripken also shows young people how the skills and teamwork needed on the field apply to school and life off of the field. Ripken underscored that “sports take down walls and barriers”. This unifier opens up communication and connectivity regardless of one’s different walks of life.

Ehrendriech provided an on-the-ground story about how he has used baseball during his overseas assignments to connect with a country’s citizens and government officials. Notably, while stationed in Tokyo, Japan, Ehrendreich organized a baseball game between the American embassy and the Japanese parliament. This game took place at the Tokyo Dome in March 2006. The U.S. team was managed by former Texas Rangers owner and U.S. Ambassador to Japan Tom Schieffer. Chief Cabinet Secretary Shinzo Abe managed the Japanese team. Abe later became Japan’s prime minister. The game ended with a diplomatic 15-15 tie.

Ehrendriech donated a number of sports diplomacy artifacts to the museum. These artifacts were on display at the event along with Ripken’s artifacts.

View more photos of the event on our Flickr page.