In divided Germany after World War II, the United States established the “Amerika Häuser” (America House) program as part of the American military government’s efforts to re-familiarize the German population with western ideals of democracy and human rights after twelve years of Nazi domination. Amerika Häuser were the foundation of what some later called the “Marshall Plan of Ideas” – a U.S. public diplomacy initiative that set a standard for later programs around the globe. This poster features a drawing by German artist Werner Krömeke of Amerika Haus Frankfurt, located at Rothschild Park where it opened in May 1957. The publication of this poster was part of a publicity initiative in 2002 for Amerika Haus. 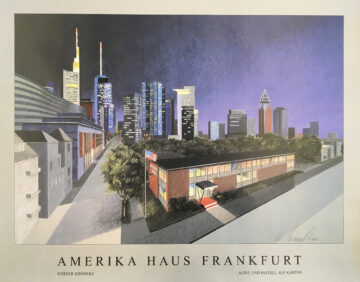