The ancient royal tombs in Lapaha are central to Tonga's cultural heritage. The most ancient of these tombs were built around 1200 AD. They are considered the most important historical and archaeological monument in the South Pacific. This painted depiction of the tombs was a gift to a Foreign Service Officer who helped secure financial assistance from the Department of State's Ambassadors Fund for Cultural Preservation (AFCP) in 2016. The Fund supports the preservation of cultural sites, cultural objects, and forms of traditional cultural expression in more than 100 countries around the world. Previous conservation work supported by the AFCP in 2012 resulted in the conservation of three multi-level tombs including the stabilization of more than 650 beach rock slabs weighing around 1000 tons by a local community workforce. 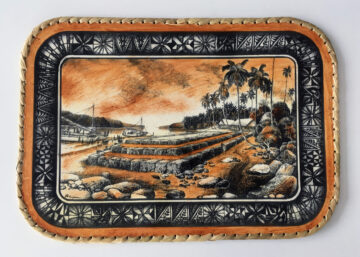