Tragedy struck a diplomatic delegation and their military escorts on April 6, 2013, in southern Afghanistan. A young diplomat named Anne Smedinghoff, three U.S. soldiers, and an Afghani interpreter were killed in a car bomb blast that targeted their group as they were delivering books to a boys' school. Anne was a 25-year-old Foreign Service Officer working in the Public Affairs Section of U.S. Embassy Kabul. Her group was on their way to deliver a donation of Pashto language books to the school in Qalat, Zabul Province, Afghanistan. In remembrance, the embassy created this challenge coin in Anne's honor, as well as a plaque which originally hung at the embassy. 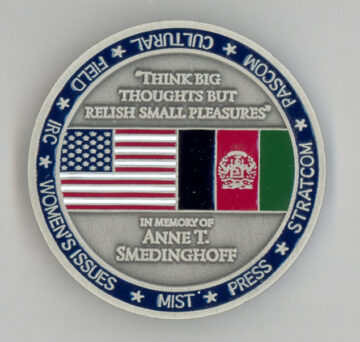