This inscribed ping-pong paddle was given to former Secretary of State Dr. Henry Kissinger by Chinese table tennis champion Zhuang Zedong in the fall of 2007. It was Zhuang’s chance encounter with a member of the U.S. table tennis team in 1971 that led to the “ping-pong diplomacy” with China of the early 1970s. Kissinger, who at that time was President Nixon's National Security Advisor, traveled to Beijing twice in 1971 to discuss the conditions under which the U.S. and China would consider normalizing diplomatic relations. 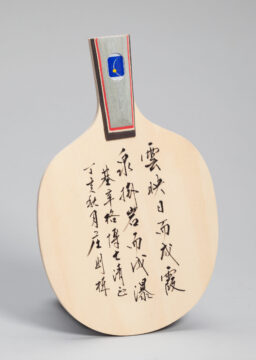 Images of items in our collections are in the public domain unless a copyright or usage restriction is indicated. Only public domain images can be reproduced without permission. Citation of this source is appreciated; please use “From the National Museum of American Diplomacy,” and provide a link back to the item page where possible.

The National Museum of American Diplomacy cannot confirm the copyright or trademark status of photographs, prints, drawings, and other artistic works that may be depicted in these images, but will provide any information known about said status. It is the user’s responsibility to obtain all necessary permissions for their intended use. Any use of images containing these items is made at the user’s own risk.