These credentials were used by Foreign Service Officer Melvin Arakaki while observing the Georgian Parliamentary elections in 2003. After receiving an invitation from Georgia, the Organization for Security and Cooperation in Europe (OSCE)’s Office for Democratic Institutions and Human Rights (ODIHR) deployed an election observation mission to monitor the 2003 Georgian elections. The observation mission included 34 election experts and observers from 16 of the OSCE’s participating states, including the United States. 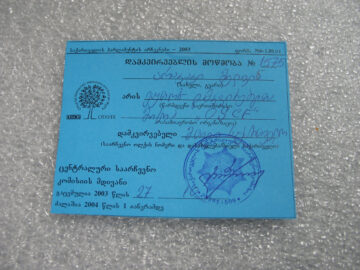