Silver tray given to Chargé d’Affaires Lloyd M. Rives by General Lon Nol, Prime Minister of the Khmer Republic (Cambodia). Rives re-opened the Embassy in Phnom Penh, Cambodia’s capital, in August 1969 after it had been closed for more than four years. The ongoing war in neighboring Vietnam created challenges in the U.S.-Cambodian relationship during this period. 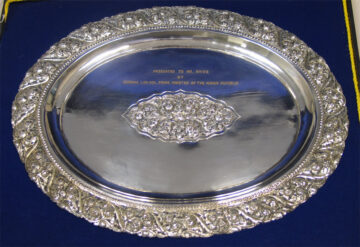