In November 1979, 52 Americans in the U.S. Embassy in Tehran were taken hostage by Iranian students. The hostage crisis lasted for 444 days. Closely following the crisis for over a year, the American public wanted to show their support for the hostages and their families. The yellow ribbon became an iconic symbol of the hope for the hostages’ safe release. When the crisis was finally resolved, Americans widely celebrated the hostages’ return. This button is an example of the many items produced to celebrate and commemorate the occasion. 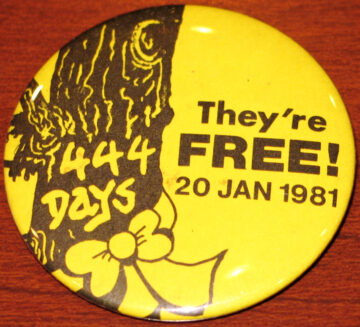