At the 2015 GLACIER Conference hosted by the U.S. Department of State in Anchorage, Alaska, Secretary of State John Kerry received this steel dish designed in the shape of the Vatnajökull ice cap as a gift from Iceland’s Foreign Minister, Gunnar Bragi Sveinson. The Vatnajökull ice cap is the largest in Europe by volume and covers about 8% of Iceland’s surface. It has lost 15% of its volume due to a warming climate over the last century. The GLACIER Conference focused on the challenges of climate change in the Arctic. 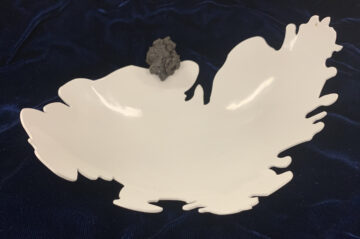