This locket and diamond ring were gifts to Secretary Condoleezza Rice from Muammar Qadhafi in 2008. She was the first U.S. Secretary of State to visit Libya in over 50 years and was the most senior U.S. official to ever meet with Colonel Qadhafi. The locket has Qadhafi’s image engraved on the inside. It was well known that he had a “crush” on Secretary Rice. He lavished her with praise during her visit. About the historic visit, Secretary Rice said: “This demonstrates that the United States does not have permanent enemies. It demonstrates that if countries are prepared to make strategic changes in direction, the United States is prepared to respond." 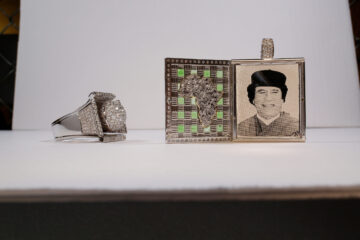