Foreign Service Officer Michael Hoyt received the prestigious Secretary’s Award after enduring 111 days in captivity in the Congo in 1964. He was serving as Principal Officer at the U.S. Consulate Stanleyville when he and his staff were taken hostage by the rebel Simbas. They were narrowly rescued in a joint U.S.-Belgian operation on November 24, 1964. His diplomatic passport from this era marks his return to the U.S. and freedom, and his day planner shows where he marked each day of captivity. 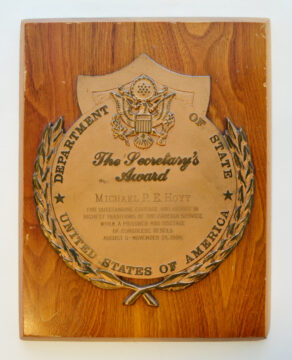