The piece of jagged metal atop this item was part of a missile destroyed under the terms of the Intermediate-Range Nuclear Forces (INF) Treaty of 1987, signed by President Ronald Reagan and Soviet leader Mikhail Gorbachev. Small pieces of metal were salvaged from one of the many nuclear weapons disabled and destroyed under the treaty. They were then turned into beautiful pieces of artwork and presented as commemorative gifts to members of the U.S. delegation observing the final destruction of missiles in Saryozek, Kazakhstan, in 1990. This one was given to Eileen Malloy, a Foreign Service Officer who was a trailblazer for female diplomats in the field of arms control. At the time, she was the chief of the arms control unit at U.S. Embassy Moscow. 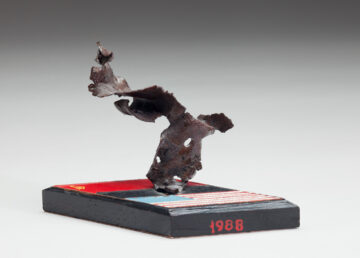