In May 2011, President Barack Obama embarked on a state visit to the United Kingdom. Secretary of State Hillary Clinton accompanied President Obama to London for the first part of his visit. While in London, Secretary Clinton received this pair of autographed portraits from Queen Elizabeth II and her husband, Prince Philip, along with an accompanying trinket box featuring the Queen's royal cipher on the lid. 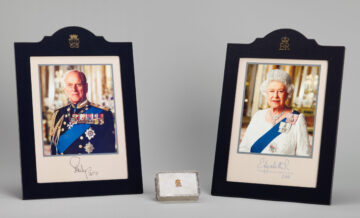