This set of Russian nesting dolls, also known as matryoshka dolls, depicts U.S. Ambassador to the Soviet Union Robert S. Strauss and various Soviet officials. Ambassador Strauss served first as ambassador to the Soviet Union (1991) and then became the ambassador to Russia (1991-1992) after the Soviet Union ceased to be. Foreign Service Officer Ed Salazar, who was assigned to Embassy Moscow at the time, commissioned an artist to create them to celebrate the arrival of Ambassador Strauss after the failed August 1991 coup by hardliners in the Soviet Union. From largest to smallest, the dolls depict: -U.S. Ambassador Robert Strauss -Soviet President Mikhail Gorbachev -Russian President Boris Yeltsin -Soviet Foreign Minister Eduard Shevardnadze -Aleksandr Yakovlev (advisor to Mikhail Gorbachev) -Gavriil Popov (Mayor of Moscow) -Anatoly Sobchak (Mayor of St. Petersburg and member of the Supreme Soviet) -Flags of the United States and Soviet Union 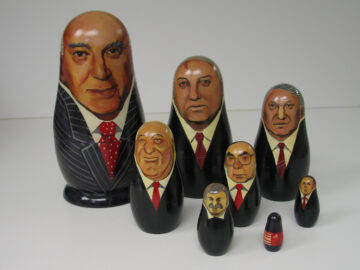