Statuette of a Falcon

At a meeting in Washington in September 2011, the Prime Minister of Kuwait presented this statuette of a falcon to Secretary of State Hillary Clinton. It depicts a hooded falcon perched on a gloved hand, representing the traditional practice of falconry in the country. 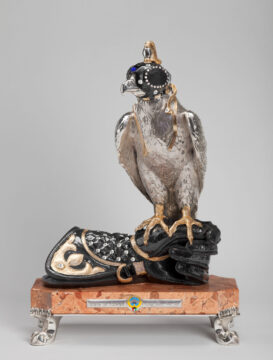