In November 1979, 52 Americans in the U.S. Embassy in Tehran were taken hostage by Iranian students. The hostage crisis lasted for 444 days. Closely following the crisis for over a year, the American public wanted to show their support for the hostages and their families. Yellow ribbons and flags were popular ways to show support. This U.S. flag was flown at a home in Idaho and was sent to one of the hostages, Foreign Service Officer Ann Swift, after her safe return home. The included handwritten note reads: “We have gathered flags which were flown by people in Idaho over the past many months in support & hope of your freedom. As a celebration of your homecoming, we would like you to have this flag, flown at the home of Mrs. Mabel Logue, as a remembrance of America’s caring. We send the love and best wishes of the people of Idaho. Welcome home, Bret & Alice Rupe" 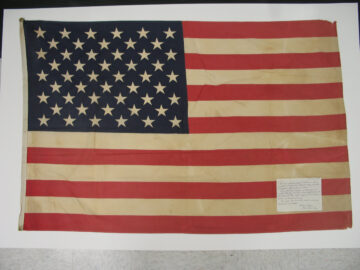 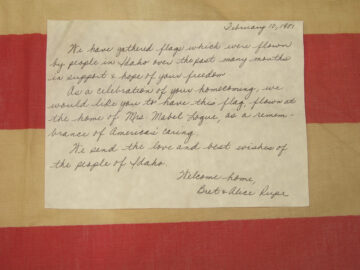