This Iraqi Ministry of Interior vehicle placard was attached to authorized U.S. embassy vehicles, allowing them to drive near polling stations during the Iraqi National Legislative Elections in December 2005. Following the ratification of the Constitution of Iraq on October 15, 2005, a general election was held on December 15 to elect a permanent 275-member Iraqi Council of Representatives. 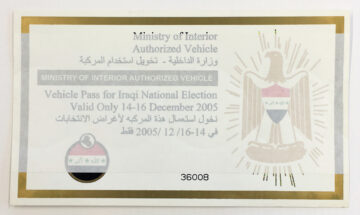