In 1987, the United States and the Soviet Union signed the Intermediate-Range Nuclear Forces (INF) Treaty, which required both parties to eliminate all nuclear and conventional ground-launched ballistic and cruise missiles with a certain striking range. This wing tip is from a ground-launched cruise missile destroyed at Davis-Monthan Air Force Base in 1989 under the terms of the INF Treaty. It was mounted to a wooden plaque and saved for display by Amb. Maynard W. Glitman, the chief negotiator of the INF Treaty on the U.S. side, to commemorate the treaty and its implementation. 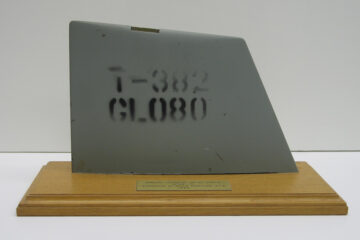