This unusual memento -- a square of yellow carpet -- was given to Michael Metrinko, one of the 52 hostages held in Iran for 444 days from 1979-1981. Framed in a shadowbox with a letter from the governor of New York as the backdrop, it is one example of the numerous letters, artworks, official proclamations, and other items sent to the former hostages after their release in January 1981. The square of carpet, as the letter explains, is a small piece of the yellow carpeting that was placed for the hostages to walk on after their plane landed at Stewart Airport in New York – their first steps on U.S. soil. The color yellow, in the form of yellow ribbons, came to symbolize hope for their safe return. 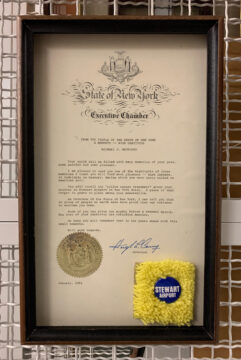