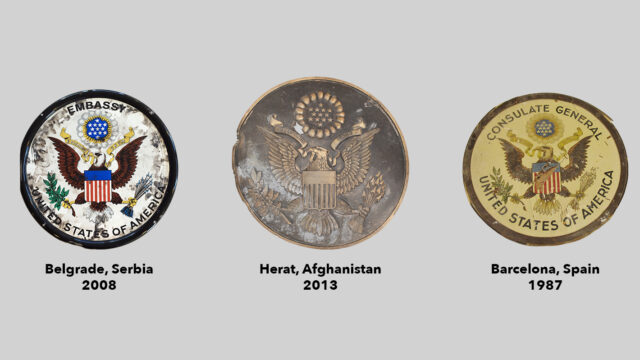 These Great Seals were damaged during attacks on U.S. diplomatic missions. They are physical reminders of the dangers that Diplomatic Security Service special agents and personnel face in protecting our missions around the world.

Whether it’s civil unrest, terrorist attacks, military conflicts, countering espionage, or any other threats, Diplomatic Security Service personnel lead the way in protecting the people at U.S. embassies, consulates, and missions in countries around the world.

What is the Great Seal?

The Great Seal is the official coat of arms that acts as the fingerprint of America. Historically, it could only be applied by an official government representative. It was a visual symbol of the U.S. Government that was meant to be recognizable even for those who could not read English. The eagle holds 13 arrows and a shield on the eagle’s breast has 13 stripes to represent the original 13 states.

This Great Seal was damaged during the October 14, 1987 bombing of the U.S. Consulate General in Barcelona, Spain.  The bomb that damaged this seal was hidden in a shopping bag that was placed inside of the stairwell outside the back entrance. At the time, the Consulate General occupied the fourth floor of an eight-story building. Eight people were injured during the attack. Following the bombing, two Catalan separatist groups claimed responsibility.

Protesters damaged this Great Seal in Belgrade, Serbia when they attacked and set fire to the U.S. embassy on February 21, 2008, in response to U.S. support for Kosovo’s independence. A large group of protestors entered the embassy and set some of its rooms ablaze. After the attack, the embassy was temporarily closed and some embassy community members were temporarily relocated to Croatia.

This large metal Great Seal, measuring about four feet in diameter, was located at the entrance to the U.S. Consulate in Herat, Afghanistan. On September 13, 2013, a truck bomb attack visibly damaged the Seal. Eight Afghan guards lost their lives defending the consulate during this attack.

We recognize the service and sacrifice of the members of the Diplomatic Security Service who work tirelessly to keep our nation safe. We also honor the special agents, contractors, and security personnel who have given their lives to protect our nation. Their service is not forgotten.