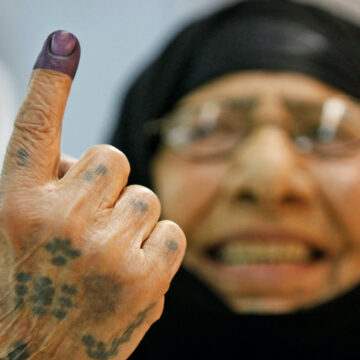 Protecting the Rights of All People.

The defense of democracy and the protection of human rights have been core values of the United States since its establishment more than 240 years ago. Supporting democracy promotes values such as religious freedom and workers’ rights. Democracy helps to secure peace, promotes economic development, combats terrorism, alleviates humanitarian crises, improves the global environment, and protects human health and safety. 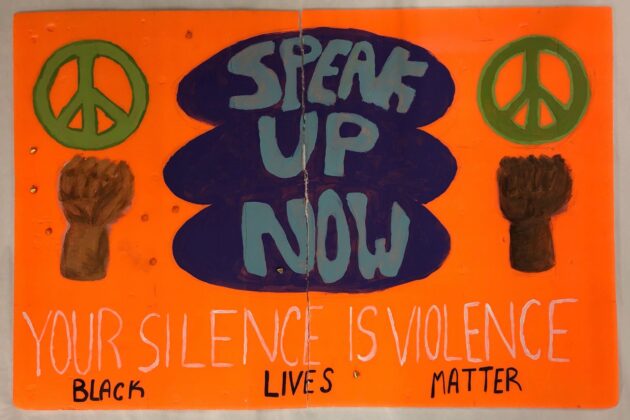 This sign is from a Black Lives Matter protest in Kingston, Jamaica in the summer of 2020, which took place outside the U.S. embassy building. It represents the spirit of protest that reached around the world at that time, and also serves as a tangible example of U.S. embassies’ roles as sites both for protest and as rallying points for international unity.
Black Lives Matter Protest Sign

Democratically-governed nations are more peaceful and prosperous. American Diplomacy advocates to strengthen democracy around the world by opposing authoritarianism and encouraging countries that are making democratic reforms.

American diplomats stand up for human rights. They use a range of diplomatic tools to defend fundamental freedoms and essential civil rights, including freedoms of speech, religion, and assembly. They advocate for equal rights for women and minorities.

Diplomats support free and fair elections in other countries by providing training and technical assistance to election authorities. They support the work of impartial election observers and help increase participation among marginalized groups, including women and people with disabilities. This work helps build confidence in the democratic process and demonstrates to others about the benefits of democracy.

After the brutal murder of George Floyd in May of 2020, rallys, marches, and protests erupted in cities throughout the United States. While most were peaceful, others were marred by destructive actions. The common thread uniting these protests was a demand for racial justice and equal treatment under the law.

These sentiments were not limited to citizens of the United States. Many U.S. embassies around the world became the focus of similar protests for local justice and rallying points for international unity. American diplomats were challenged to respond to the moment and speak up for American values.

On Saturday, June 13, Harry B. Harris, then U.S. Ambassador to South Korea, personally authorized the hanging of a 40 by 20 foot Black Lives Matter banner on the facade of the U.S. Embassy building in Seoul, just below the rainbow flag that was already on display for Pride Month. Embassy Seoul quickly became the focus of international press attention, and soon, photos of the Black Lives Banner hanging from the front of the building were circulating around the world.

On Sunday evening, June 14, barely 24 hours after installing the banner, Ambassador Harris received instructions from Washington to remove it from the building, which he did. Today, that Black Lives Matter banner—the only one to be displayed at a U.S. Government building—is now part of the collection of the National Museum of American Diplomacy.

Today, the actions of individuals in the summer of 2020 have resulted in a renewed awareness that democracy is an ongoing struggle. Living up to the ideals and the democratic principles of diversity, equity, inclusion, and accessibility (DEIA) for all citizens requires constant work. In his remarks announcing the appointment of Ambassador Gina Ambercrombie-Winstanley as the Department of State’s first Chief Diversity and Inclusion Officer in April of 2021, Secretary of State Antony Blinken noted that Embassy Seoul made headlines by hanging a Black Lives Matter banner in the wake of George Floyd’s killing.

What began as an audacious move on the part of one ambassador has become celebrated as a global gesture of solidarity. It is evidence of the important work that American diplomats do to support and promote the civil rights of people around the world.

Human Rights and Democracy in Photos

Take a look at what human rights and democracy work looks like in the world of diplomacy.

Human trafficking, or modern slavery, is the greatest threat to freedom around the world. An estimated 40 million people, including many children, are enslaved around the world. They are forced into labor, marriage, and sexual exploitation. In some places, children as young as seven are forced to mine for gold in harsh and dangerous conditions.

Rose from Ghana was sold into slavery at the age of eight and forced to work on dangerous fishing boats for eight years. Rose’s trafficker also forced her into a relationship with another male trafficking victim, producing a child. Today, Rose and her child are free as a result of the U.S. Child Protection Compact Partnership with Ghana signed in 2015. The CPC Partnership is the first jointly developed bilateral plan to address child sex trafficking and forced child labor within Ghana.

By working to support free and fair elections abroad, American diplomats help educate residents of other nations about the benefits of democracy.

The United States Agency for International Development assisted with election monitoring and peace-building efforts during the election.

The ability to worship one’s religion of choice is a fundamental freedom in a democratic society.

Advocacy for Women and Girls

A lack of educational and job opportunities poses major challenges for young people around the world. The U.S. Agency for International Development (USAID) works with partner organizations to provide education programs, job training, and mentorship opportunities that create jobs and lead to sustainable economic growth.

For decades, a Department of State employee’s career could be terminated simply for their sexual orientation. Today there are countless LGBTQ+ employees, family members, and allies in U.S. foreign affairs agencies, many of whom are members of glifaa, the Gays and Lesbians in Foreign Affairs Agencies affinity group.