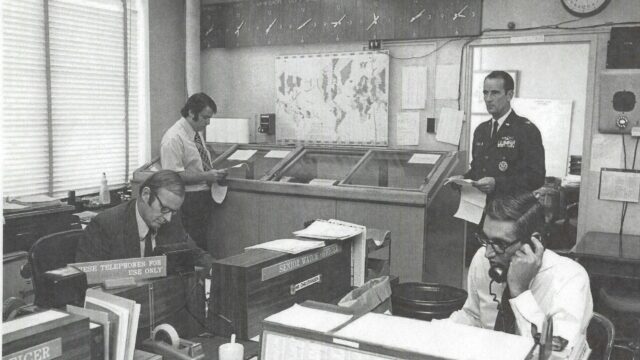 60 Years of the State Department Operations Center: On the Front Lines of History

In this Diplomacy After Hours, NMAD held a discussion about the State Department’s 24/7 crisis communication hub, the Operations Center. Our panelists explored its important role in protecting American interests over the past 60 years. Diplomats Navarro Moore, Holly Adamson, Nicholas Klinger, and Emily Yu shared first-hand stories about their work on “the watch” and crisis management teams. Their stories illuminated how they, and other Operations Center staff, assist in communicating critical messages from around the world to American leaders.

Watch 60 Years of the State Department Operations Center: On the Front Lines of History below

Navarro Moore is a diplomat with the U.S. Department of State, serving as Watch Coordinator in the Department’s Operations Center. He worked previously as a Senior Watch Officer in the Operations Center; Acting Deputy Director and Senior Kenya Desk Officer in the Office of East African Affairs; Chief of Staff for the Bureau of African Affairs; Deputy Political Chief in Accra, Ghana; Political Officer in Canberra, Australia; and Consular Officer and Staff Assistant in San Salvador, El Salvador. Being nominated by the Secretary of State and receiving a Distinguished Honor Award for his work leading an Operations Center team during the 2020 Persian Gulf Crisis and the initial phases of COVID-19, coordinating the inaugural U.S.-Kenya Strategic Dialogue, and contributing to the 2018 Ethiopia-Eritrea Peace Summit are some of his signature diplomatic achievements. Prior to joining the Foreign Service, Navarro was awarded the Department’s Thomas R. Pickering Foreign Affairs Fellowship and interned with the Department in Washington, D.C., Bangkok, Thailand, and Suva, Fiji. His other experience includes an internship in the U.S. House of Representatives, a stint at the Federal Election Commission as a Campaign Finance Analyst, and an internship at the Claude Pepper Center for Intercultural Dialogue in Tallahassee, Florida. He is a Council on Foreign Relations Term Member and a member of the International Career Advancement Program Alumni Association. Navarro holds an M.A. in International Affairs from Florida State University (2009) and a B.A. in Political Science from Valdosta State University (2006). He received several awards for his work with the Department and was featured in the Washington Post and on the Department’s website as part of its “Life’s a Trip” recruitment campaign. Navarro enjoys practicing Spanish, playing basketball and golf, reading social psychology books, and mentoring. He was born in Atlanta, Georgia, raised in Valdosta, Georgia, and resides in Washington, D.C. with his wife and three children.

Nicholas Klinger is a career foreign service officer and currently serves as desk officer for the Czech Republic and Slovak Republic in the Office of Central European Affairs. Nick previously served as a Watch Officer/Senior Watch Officer in the Operations Center and at Embassy Tegucigalpa and Consulate General Ciudad Juarez. Nick began his career with the Department as a civil servant in the Bureau of Educational and Cultural Affairs where he managed the International Visitor Leadership Program. Before joining the Department, Nick was a Peace Corps Volunteer in St. Lucia. He graduated from the University of Arkansas with a B.S.B.A. in finance and earned an MBA in 2013 from Georgetown University’s McDonough School of Business. Away from work, Nick cheers for his Arkansas Razorbacks and Washington Nationals. He is also head coach of his 5-year-old daughter’s and 7-year-old son’s soccer teams.

Emily Yu joined the Foreign Service in August 2014. Prior to serving in the Operations Center as a Watch Officer, she served as the Human Rights Officer at U.S. Embassy Seoul and as a Consular Officer at U.S. Embassy Guatemala City. She is a first-generation American and the first in her family to graduate college. Before joining the State Department, she worked at Asian Americans Advancing Justice, a non-profit dedicated to advancing civil rights and was a product design associate at a start-up in Mountain View, California. She is a proud Pickering Fellow, studied fine arts at the University of Southern California and holds a master’s degree in International Affairs from Columbia University.