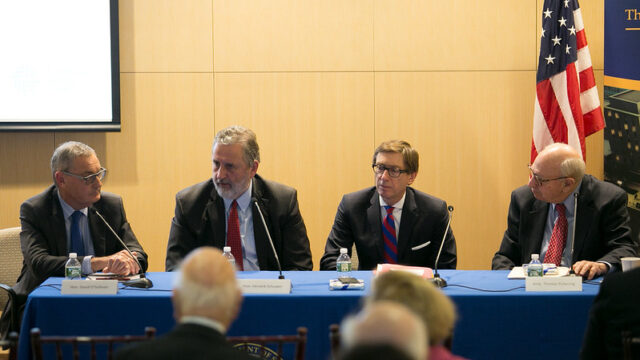 A Legacy Remembered: Perspectives of the Marshall Plan

On April 3, 2018, in cooperation with the George C. Marshall Foundation, the National Museum of American Diplomacy (NMAD) held an event recognizing the 70th anniversary of the establishment of the European Recovery Program, more commonly known as the Marshall Plan.

The program’s first half focused on the historic importance and lasting legacy of the Marshall Plan. Dr. Mann explained how NMAD featured aspects of the Plan on its social media platforms and outlined the museum’s future exhibit on the Plan, which will focus on its impact on Europe as well as the American economy and workforce. Dr. Havers paid tribute to the character of George C. Marshall, calling him a visionary and strategic leader. Dr. Hamilton noted the Plan’s influence on continuing Euro-American trade partnerships. Dr. Steil discussed how the Plan exacerbated existing tensions between the U.S. and the Soviet Union, precipitating the Cold War.

An enduring template for aid and assistance

In the second half of the program, American and European diplomats discussed the Plan’s enduring influence. A. Wess Mitchell described the Plan as an “act of strategic foresight,” restoring Europe to order while strengthening America’s economy. Ambassadors Wittig, Schuwer, and O’Sullivan spoke of the Plan’s impact on their respective countries, and all stressed a common point: the enduring American-European alliance had its roots in the Marshall Plan. Ambassador Wittig noted that Germany remains grateful for America’s aid to a former adversary.

Next, Ambassador Schuwer took the audience back to the dire situation in the Netherlands in 1947 when 70 percent of the infrastructure was destroyed by deliberate flooding by retreating Germans. Within ten days of the Plan’s signing, he continued, a ship filled with life-saving American-grown wheat from Galveston, Texas, arrived in Rotterdam to a 3:00 a.m. firework display. Ambassador O’Sullivan brought a continental perspective, saying the Plan encouraged European cooperation,  paving the way for the creation of the European Union. Fittingly, he reminded the audience that, with the exception of the Balkan Wars, the continent had enjoyed peace, freedom, and prosperity for the past 70 years. Ambassador Pickering stressed the importance of the critical transatlantic relationship and moderated a lively question-and-answer session. Dr. Havers concluded the informative and engaging program.

Watch the event A Legacy Remembered: Perspectives on the Marshall Plan