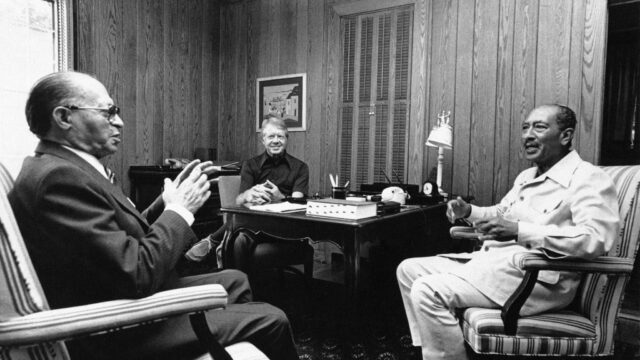 An important venue in diplomatic history, Camp David has housed many global leaders and diplomatic negotiations since its construction in 1938. NMAD Public Historian Dr. Alison Mann joined Diplomacy Classroom to discuss the history of Camp David and the 1978 Camp David Accords.

Alison helped us understand the conflict between Egypt and Israel in the 1960s and 70s as well as the eventual peace negotiations at Camp David between Israeli Prime Minister Menachem Begin, Egyptian President Anwar Sadat, and US President Jimmy Carter. Allison highlighted how President Carter relied on the venue of Camp David and diplomatic techniques to build strong relationships, and ultimately trust, between Sadat and Begin.

Ultimately, the important discussions and negotiations between the leaders at Camp David resulted in the Egypt-Israel Treaty and the withdrawal of Israel from the Sinai Peninsula.