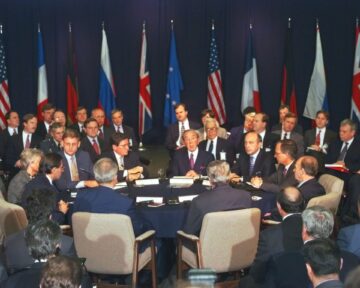 On November 1, 1995 at Wright-Patterson Air Force Base outside of Dayton, Ohio, Secretary of State Warren Christopher and then-Assistant Secretary of State Richard Holbrooke opened negotiations with the Presidents of Croatia, Bosnia, and Serbia for a permanent agreement to end more than three years of war that had already claimed over 200,000 lives and forced 2 million from their homes.

Over 300 journalists from around the world thronged the Base’s fence, hoping for photos and a quote from the American diplomats or the Balkan Presidents: Slobodan Milošević of Serbia, Franjo Tuđman of Croatia, and Alija Izetbegović of Bosnia-Herzegovina. Mary McCarter, a reporter from the Dayton Daily News, was among them and recalled, “One of the most memorable and shocking things I remember is reporters would be behind the gates… and we could see Serbian President  Slobodan Milošević come out for his morning stroll around the perimeter. I was thinking here it is a beautiful fall day in Dayton, Ohio and this murderous dictator is taking a walk 100 yards away from me. It was a very strange feeling.”