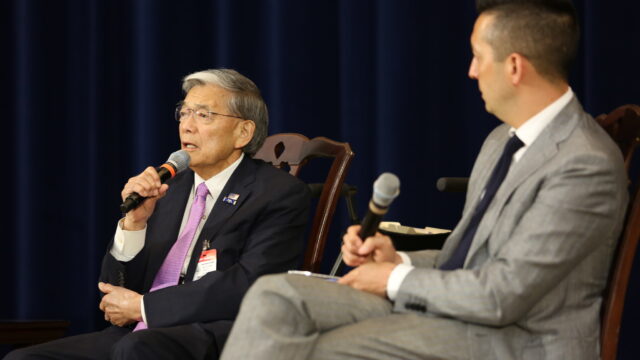 On May 30, the National Museum of American Diplomacy partnered with the Embassy of Japan, the Secretary’s Office on Civil Rights, the Bureau of East Asia and Pacific Affairs, and the Asian American Foreign Affairs Association to host the State Department’s culminating event for Asian American Pacific Islander Heritage Month. The event featured the newly released documentary on the life of former Secretary of Commerce and Transportation Norman Mineta, entitled: Norman Mineta and His Legacy: An American Story.

The film featured the life of Secretary Mineta and his family from the time they arrived in the United States, including the incarceration of his family after the bombing of Pearl Harbor during World War II at Heart Mountain in Wyoming. The documentary noted the impact that this event had on his life, influencing his public service career from being a local government public servant all the way to holding two cabinet positions during two administrations. Along the way, as a member of Congress, he worked to pass legislation providing financial reparations to the Japanese Americans incarcerated. The legislation stated that government actions were based on “race prejudice, war hysteria, and a failure of political leadership” as opposed to legitimate security reasons. He was able to do this with the support of his longtime friend Republican Senator Alan Simpson, who he met during a boy scout activity while incarcerated in the camp.

In his comments, former Secretary Mineta noted that through his work, he tried to ensure that no other group of people would be discriminated against based on inaccurate assumptions about being American. In particular, he highlighted his work with President George W. Bush after the September 11 attacks. The two filmmakers, Dianne Fukami and Debra Nakatomi spoke about the curriculum they have developed that accompanies the film to teach the central themes regarding what it means to be an American. Many in the audience noted the struggles as an American diplomat to be seen as a “real” American.

After the film screening and discussion, participants attended a reception hosted by the Embassy of Japan.

See more photos of the event on our Flickr page.