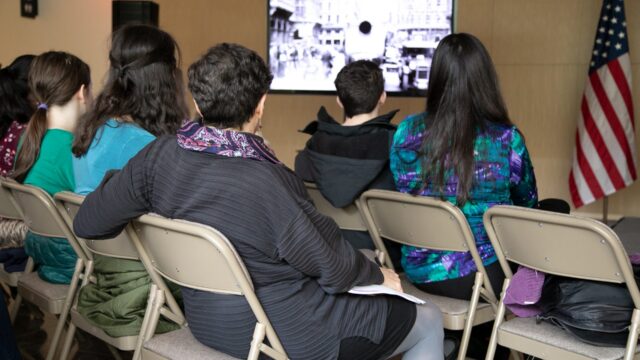 NMAD Public Historian Dr. Alison Mann gave opening remarks highlighting the various obstacles the Krauses encountered in accomplishing this goal and the role U.S. diplomats played in assisting them. In particular, Dr. Mann noted how a combination of immigration laws passed by Congress after World War I, visa quotas for each country, and widespread antisemitic sentiment in America resulted in a very limited number of visas being available for countries with high Jewish populations. Furthermore, visa-seekers needed a U.S. citizen sponsor and had to prove they could support themselves in America without public assistance. For German Jews, this was a particular hardship. A 1934 law had been passed stipulating that anyone leaving Germany could take no more than 10 marks with them — the equivalent of $4 in 1939.

Dr. Mann spoke on how the Krauses would never have been able to save these children without the assistance of American Consul Raymond Geist. Geist was assigned to the U.S. Embassy in Berlin. He had to ensure that neither U.S. nor German laws were violated, and used his diplomatic skills with Nazi officials to facilitate the children’s legal rescue.

After the film, Senior Advisor in the State Department’s Office of the Special Envoy for Holocaust Issues, Deborah Guido-Ogrady, engaged in a discussion with the students. She explained that January 27 is the day the Allied forces liberated Auschwitz, one of the most infamous concentration camps of the Holocaust. She also highlighted the contemporary importance of Holocaust Remembrance Day. Specifically, reminding students that part of “remembrance” is remembering that individuals can and should speak up when they see something wrong.

This event was made possible by the sponsorship of the Koret Foundation, the Jewish Federation of Greater Washington, and Chuck and Amy Spielman.