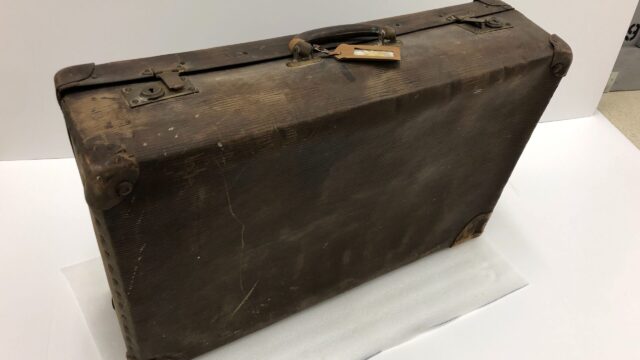 From Holocaust Survivor to Ambassador: The Story of Robert G. Neumann

﻿January 27th is International Holocaust Remembrance Day, a day to honor the six million Jewish victims of the Holocaust and millions of other lives lost. Today we pause to honor Ambassador Robert G. Neumann, sharing his story from a personal object of his in our collection.

Our Collection: Remembering the Holocaust

Ambassador Robert G. Neumann was born in Vienna, Austria, in 1916. He studied diplomacy at the University of Vienna, the University of Rennes, and at the Geneva School of International Studies. During his studies in Geneva, he was imprisoned by the Nazis and sent to a concentration camp.

After his release, Neumann emigrated to the United States. He carried all of his possessions in this one suitcase, which his son later donated to the National Museum of American Diplomacy.

This suitcase provides a physical reminder of one Holocaust survivor’s determination to rebuild his life in the United States.

A Career in International Affairs and Diplomacy

Neumann went on to become an international affairs scholar at UCLA. After becoming a tenured professor, he was named U.S. Ambassador to Afghanistan by President Lyndon B. Johnson. While the post was initially a temporary one, Neumann was compelled to continue his career as a diplomat and resigned from his professorship. Neumann would later serve as U.S. Ambassador to Morocco and U.S. Ambassador to Saudi Arabia.

From his oral history created by the Association for Diplomatic Studies and Training, Ambassador Neumann reflected on what he learned from the camps that he applied to his work as a diplomat:

In addition to many other tours worldwide, Ambassador Neumann served as a Deputy Assistant Secretary of State. In 2018, he received the American Foreign Service Association (AFSA) Lifetime Contributions to American Diplomacy Award.

From Refugee to Diplomat: A True American Story

Interested in supporting our museum and the stories of diplomacy? The museum is seeking support to complete the development and construction of our permanent exhibits. Click here to find out how you can support the museum.