This bottle of vodka in the shape of an AK-47 assault rifle was a lighthearted gift from Russian Foreign Minister Igor Ivanov to Secretary Colin Powell on the occasion of his 65th birthday in 2002. Also known as a Kalashnikov rifle, it was originally designed in the 1940’s for the Soviet military. Powell recounted on a few occasions afterward, with some humor, that he was dismayed when Protocol officials deemed this gift to be “over value” and he was not allowed to consume its contents. 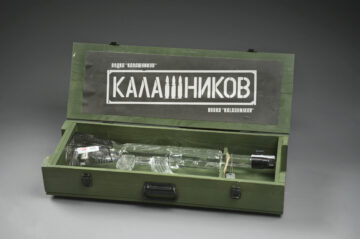