Ambassador Dubs’ Letter to his Daughter

Adolph “Spike” Dubs was a career Foreign Service Officer. In 1973-74 he served as charge d’affaires at Embassy Moscow, and in 1978 he was appointed U.S. Ambassador to Afghanistan. On February 14, 1979, Ambassador Dubs and his driver were abducted by armed militants posing as police. Afghan and accompanying Soviet officials hastily mounted a heavily armed rescue attempt. Dubs was assassinated during the attempted rescue. Ambassador Dubs was a prolific letter writer and kept in close contact with his daughter Lindsay, relaying details of his duties, conversations, and travel. He also dispensed fatherly advice and encouragement. Six years prior to Dubs’ assassination, U.S. Ambassador to Sudan Cleo Noel was kidnapped and assassinated by a terrorist group. Ambassador Dubs wrote to Lindsay on March 3, 1973 and included his thoughts about this tragedy. His words sadly predicted the same situation in which he would find himself in Kabul. He wrote: “...I personally don't like to think of being any kind of a martyr; but if I were ever taken in a situation such as that which occurred in Khartoum, I would want Washington to understand that I would rather sacrifice my life than to have someone capitulate to the demands of terrorists." 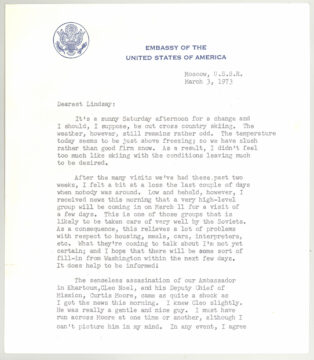 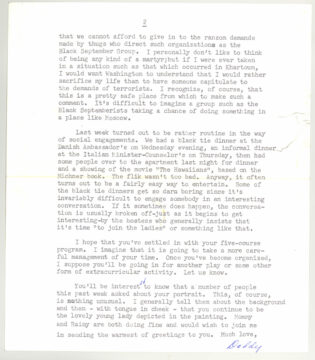 Ambassador Dubs' Letter to his Daughter