On April 30, 1980 – the eve of May Day – two protestors with Communist sympathies burst into U.N. Security Council chamber and splashed William vanden Heuvel, deputy U.S. ambassador to the U.N., and Soviet Ambassador Oleg Troyanovsky with bucketfuls of red paint. The protestors’ aim was to accuse the U.S. and the Soviet Union of being the world’s principal warmongers. The shocked and paint-soaked ambassadors exited the U.N., with reporters snapping photos and shouting questions. Asked, “What did Ambassador Troyanovsky say to you?” vanden Heuvel decided to quip, “Better red than dead!” to help lighten the tense mood. Troyanovsky laughed and thanked him for taking the menace out of the situation. Though neither man was physically injured by the attack, vanden Heuvel went to a hospital to have the red paint drained from inside of his ears. 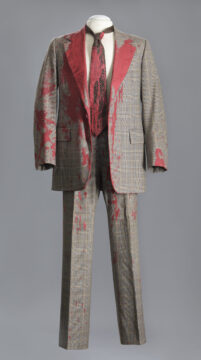 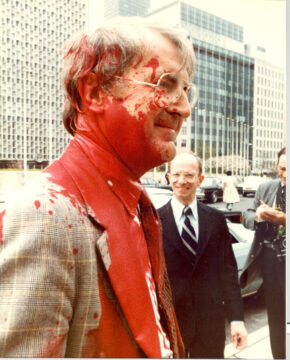