Rubik's cubes like these were presented by Under Secretary of State Wendy Sherman to U.S. members of the administration and delegation involved in the negotiations of the Iran nuclear agreement of 2015. The agreement’s substantive topics are labeled on each side. Ambassador Sherman likened the negotiations to solving a Rubik's cube puzzle – all the pieces must fit together before it’s solved. “Nothing is agreed until everything is agreed,” she would often tell reporters. 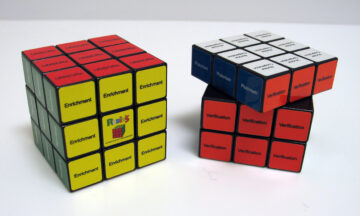