On November 4, 1979, Iranian militants forcefully took over the U.S. Embassy Tehran and ultimately held over 50 Americans hostage for 444 days. Negotiations between the U.S. and Iran for the release of the hostages were brokered through the Foreign Ministry of Algeria. The Declarations of Algiers was a set of agreements that secured the release of the American hostages in Tehran on January 20, 1981. Harold Saunders was the Assistant Secretary for the Bureau of Near Eastern Affairs at the Department of State, and played a key role in finding a resolution to this crisis. On the way to the signing of the agreements at the Foreign Ministry in Algiers, Deputy Secretary of State Warren Christopher said to Saunders, “Give me your pen for good luck.” He used Saunders’ pen to sign the historic agreements. Warren Christopher soon returned Saunders’ pen to him, in a presentation box with a photograph and inscription. 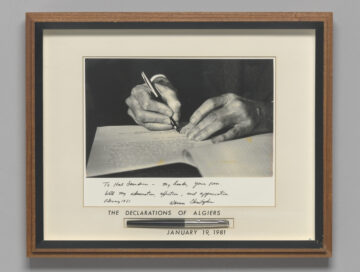